When people look back at the achievements of modern British cooking and its immense progress in the last decade especially, few will deny that a lot of those accomplishments owe themselves to the times before the Great War. British cuisine was quite well-known and just as celebrated as a lot of other nationalities'. If it were not for the period of great austerity of the middle of the 20th century, and the bad publicity generated by various continental European authors, especially French ones (Alexandre Dumas, Goscinny & Uderzo spring to mind), the reputation of its cooking would not have been so shattered. But now, you can find British cookery shows on numerous TV channels the world over, and not just that perennial turncoat Jamie Oliver or that foul-mouthed bloke with his kitchen disasters, however he's called...

Anyhow, a vast amount of these dishes are not new - they are old, old, old, but just brought to life again through love and attention to detail. And the trifle is no exception. Back in the bad old days, I remember it as being a sad, wobbly gelatinous mess either doused far too heavily in the cheapest of alcohols or filled with the most tasteless ingredients. But rewind to the 17th and 18th century, and English puddings, including the sumptuous English trifle were copied and adapted by the Italians, where they were highly fashionable. The trifle was given the name Zuppa Inglese or "English soup". The word zuppa refers to inzuppare, which means "to dunk", a reference to the sponge in it. The tiramisù is actually an indirect derivation of the English trifle.

Anyhow, I digress. I made this trifle for our neighbour's 59th birthday. It requires little hard work, but a lot of time and a bit of imagination. There are many variations, but I stuck with the classic ingredients, as we shall see below...

Beforehand:
Get a large glass bowl ready for filling up, and turn on the oven to 160°C.
I would recommend doing the jelly (level 2) first, as it requires time in the fridge when you can do all the other layers.

Instructions for the sponge:
Put all the ingredients into a bowl and stir until the mixture is slightly shiny and fairly consistent.
Pour it into a shallow cake tin or the like. I used a flan base because I wanted to cut the sponge up into pieces and put it at the bottom of the glass bowl. 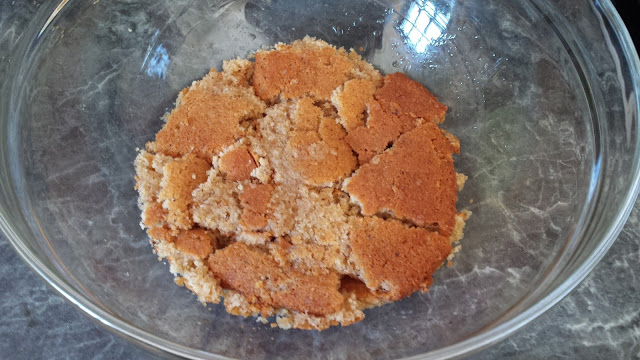 Put it in the oven for between 30 and 40 minutes, or until the point you can put a thin knife or skewer in it and it comes out clean. Break it into pieces and put it at the bottom of the glass bowl.

Push it into the bottom of the bowl and slightly up the sides, then pour your alcohol over. Put the bowl in the fridge until you need it again for the next layer.

Second layer, jelly -
Ingredients:
300g fruit (I used fruits of the forest, but use any flavour you want)
1 packet of gelatine (usually about 25-30g)
500ml apple juice or water
An appropriate amount of sugar (50g-100g, depending on your taste 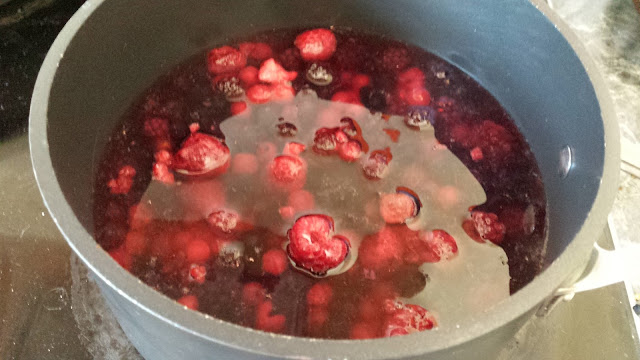 Heat the fruit and sugar in the water / apple juice and simmer until the sugar dissolves, but don't let it boil. Pour three tablespoons of cold water over the gelatine in a large bowl, and stir. It should become hard. Then pour the hot sugary fruit over the hardened gelatine. Put this in the fridge for a maximum of 3 hours to set. The jelly should not be fully set as you need to pour it into your trifle. So once it has almost set, but only enough not to run, pour it over the sponge and put it back in the fridge to continue setting. 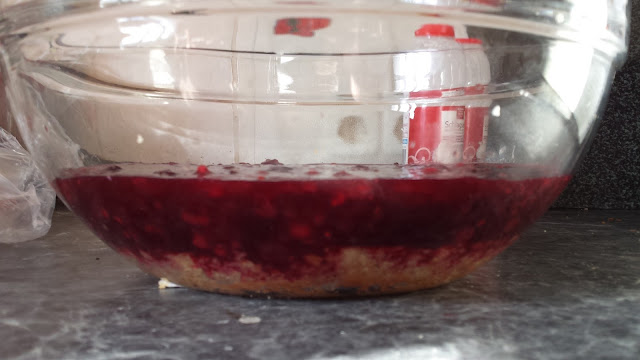 Third layer, crème pâtissière (or cold custard to you and me) -
Ingredients:
4 eggs (yolks only)
500ml milk
50-60ml cream
1 vanilla pod, cut open and the contents dispersed in the milk and cream
30-50g fine sugar
1 to 3 tablespoons of cornflour

Instructions:
Put the egg yolk, sugar and cornflour together in a bowl and mix together. Put the milk, cream and vanilla in a saucepan and heat until simmering but not boiling. Pour the hot milk over the yellow mixture and stir vigorously until all the ingredients are properly mixed in. Then put it back on the heat and stir constantly until it gets stiffer in consistency. Place the contents in a bowl and put a clingfilm lid on it to stop a skin forming. Place it in the fridge until cooled.

Instructions:
Whisk for as long as it takes the cream to thicken up. You'll know, because it stays on an overturned spoon. 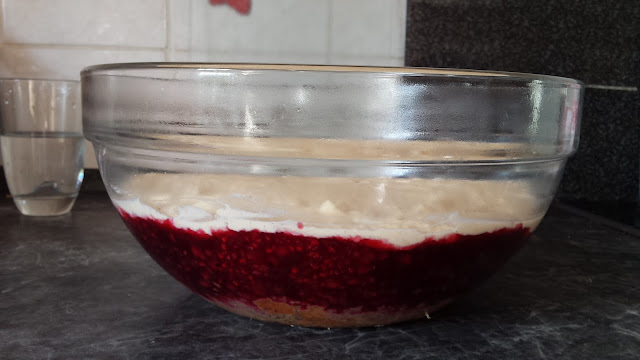 Finishing instructions:
Take the glass bowl out of the fridge, pour the layer of crème pâtissière over the jelly.
Then pour the whipped cream over the top. 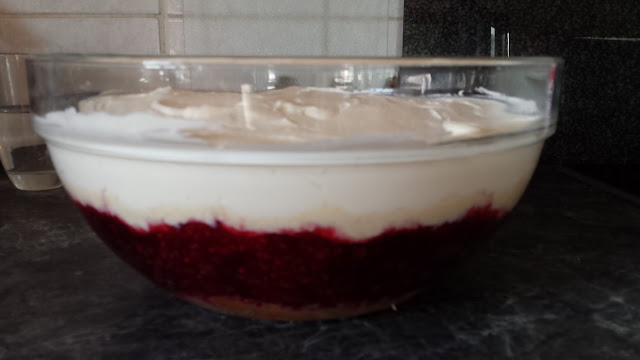 Finally, add your own touch to the top of your trifle - almond slices, fruit slices, whatever. I put some frozen fruits of the forest on top in a topical design for my neighbour's birthday! 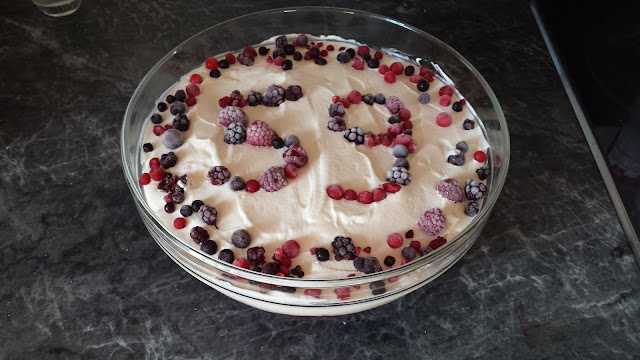 Posted by LitskiLite at 14:13 No comments: